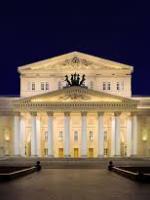 We are happy to announce second round of our streaming sessions, and we are confident that you, our honored guests, will share this joy with us. Nothing can replace real theatre with live stage act and real breathing of the audience, which you create upon visits. During our online broadcast, however, we received such a wonderful feedback based on your engagement, so exchange of emotions happened in full. We are not going to reference any effervescent quotes, we will simply share the statistics. Numbers are very impressive and demonstrate your loyalty to the Bolshoi, and how supportive you are of our initiative.

First six online broadcasts gathered nearly three million people – so-called unique users – from one hundred thirty four countries! We ‘have counted’ six and a half million of views. Absolute leaders, beside Russia, became The USA, Japan and Brazil. The Sleeping Beauty alone attracted ecstatic attention of one and a half million of admirers. Number of searches queries grew by five times. Overseas colleagues – ballet and opera lovers, our friends – are successfully competing with Russians.


* Each performance – we firmly follow our tradition – will still begin at 7 pm Moscow time. Streaming will be in ‘premiere’ mode which means you cannot be late! In order to receive a reminder about upcoming performance, you need to subscribe to the official YouTube channel of the Bolshoi. Access to the video of each performance will be granted within 24 hours after the end of the premiere.
Tweet
LASCIA UN COMMENTO
﻿
© Copyright 2020 - Associazione culturale non-profit "Cantare l'Opera"® - C.F.: 97445470582 - P. IVA 11060961007 - All right reserved
E' vietata la riproduzione, anche parziale, di tutti contenuti del sito - Cantare l'Opera è un marchio registrato
Termini e condizioni d'uso Privacy policy Note legali Credits